Sonali and I sat down to discuss Hulu’s new original series Mrs. America, its eerie resemblance of today’s culture wars and why we still need an Equal Rights Amendment. Click on the image below to get in on the fun. 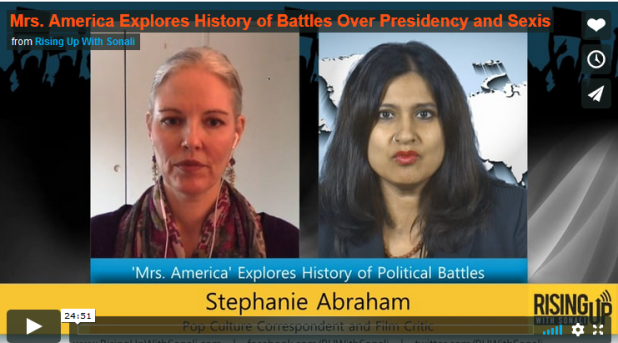 Check out my review published today by the feminist pop culture magazine Bitch. Also in its entirety below:

In 2011, The New York Times described reporter Kim Barker’s war memoir, The Taliban Shuffle: Strange Days in Afghanistan and Pakistan, as “hilarious and harrowing, witty and illuminating” and wrote that Barker “depicts herself as sort of a Tina Fey character.” Within weeks, Fey bought the book’s film rights. Fey wanted to play a strong character who excelled in a male-dominated field, to show that women can back each other in the workplace, and dedicate the work to her father, a veteran and journalist, who passed away last year. The result is Whiskey Tango Foxtrot.

The film’s trailers present the movie as a comedy a la Sisters, and although it has been dubbed a “feminist comedy,” it’s more of a dramedy with a little rom-com thrown in. While the film accomplishes Fey’s aforementioned goals, in doing so it champions a white, middle-class American feminism that sees Western women as free and other women, in this case Afghan women, as oppressed. This Orientalist storyline is not only problematic and unoriginal, it’s also dangerous as it continues to be used to justify U.S.-led wars in Afghanistan, Iraq and other places throughout South, Central and West Asia. END_OF_DOCUMENT_TOKEN_TO_BE_REPLACED

Monday already?
Snackie time! Make sure to listen with the volume on—the sound of Molly snacking on an apple cracks me up 😍. #livingthegoodlife #goldendoodle #happysaturday
Hi we’re the cutest too. 18 years being friends with @jess_hoff. Lucky me!
Loading Comments...
Comment
×