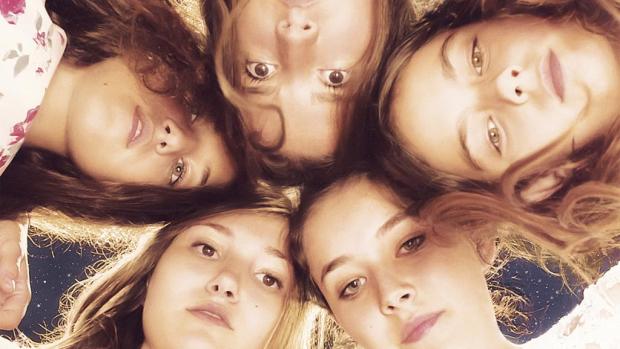 The beautiful and challenging new film Mustang looks at the lengths that people will go to crush female independence and sexuality, and the varied responses young women can have in the face of strangling sexism and male domination. It’s notable that the film, which takes place in Turkey with a Turkish cast, is France’s official entry to the Academy Awards—the director, Deniz Gamze Ergüven, is Turkish and French.

Mustang’s story is told through the eyes of Lale (Günes Sensoy), the youngest of five orphaned sisters who are being raised by their grandmother in a small Turkish town. Lale is only nine years old, but is wise enough to see injustice and sassy enough to renounce it. The film opens with her as narrator saying, “It’s like everything changed in the blink of an eye. One moment we were fine, then everything turned to shit.”

That “blink of an eye” is the movie’s inciting incident, which takes place just after school has let out for the summer. On the walk home, the sisters go for a swim in the sea. They’re fully dressed in their school uniforms and play a game of chicken fighting in the water, sitting astride the shoulders of some male friends and trying to push each other. They giggle in the sunlight, their smiles contagious. Then the girls wander through a neighbor’s yard and pick some apples. When he yells at them to scat, they tell him to calm down and run home laughing. Their carefree spirit permeates the screen.

When they arrive home, the stern face of their grandmother (Nihal G. Koldas) freezes them. News of their frolicking has been delivered by the gossiping neighbor Mrs. Petek, who informed their grandmother that they had been “pleasuring themselves on boy’s necks.” The girls don’t understand and defend themselves by saying it was just a game. But their grandma can’t hear them, too panicked by what others think.

When her son, the girls’ uncle, gets home, he shames her for not raising the girls correctly and for having given them too much freedom. His wife joins in the finger-wagging. The grandmother then changes her tune and offers to prove that they haven’t been “sullied.” The next day, their uncle takes them in for a “virginity report,” in which a doctor examines their hymen to ensure they have not had intercourse.

With the exception of the eldest sister, a teenager who has a secret boyfriend who she’s in love with, the young women are not aware of their budding sexuality. Yet, the adults around them have suddenly become obsessed with it, making it their mission to suppress it, with the grandma leading the charge. She locks the doors, has metal gates installed and puts the girls on house arrest, and prohibits them from leaving the property. Anything likely to “pervert” them gets banned: make up, the computer, even the telephone. Older women come over to teach them how to sew, cook, and clean. If the grandma can’t control her the girls, she’ll find them husbands who will. Lale narrates, “The house became a wife factory that we never came out of.”

Still, the girls aren’t having it. They find support in each other and, led by Lale, who is an avid soccer fan, they sneak out to watch a soccer match in the national stadium, which due to unusual circumstances is only allowing female attendees.

This film does so much right. From the start, it shows how patriarchy and its constraints on women continue to function because of the ways that women collude with it. If the neighbors, the aunties, and the grandmother rejected the harmful rhetoric of how the girls should have been behaving, the gossip would have had no power. Instead, they would have defended them and encouraged them to explore and to flourish into their true selves.

The script is well-written, the director’s eye is incredibly sharp, and the film’s visuals are aesthetically moving. So much is communicated visually that often dialogue isn’t present or necessary, particularly with regards to the intimacy of sisterhood. For example, as the five girls lay in their bedroom together, their bodies curl into each other, and they whisper and guffaw throughout the afternoon. In a montage of the girls’ soccer adventure, their joy and charisma lights up the screen and we get a glimpse of how big they could be if given the space, if gender oppression wasn’t trying to crush them.

Then there’s the innovative way Lale’s character development is expressed through close-up shots of her shoes. While I’d love to say more about this, I don’t want to spoil it. Suffice it to say, when you watch the film, pay attention to her choices in footwear as the story progresses. I’ve never before seen a young woman’s self-determination communicated through her feet. I’m still stunned by how brilliantly it was done. If the film is ever selling merchandise, I definitely want a t-shirt that reads, “I heart Lale.”

It’s a big deal that France chose this film to represent it at the Oscars and may be a step in the right direction in terms of the country embracing its diverse population. The decision was made before the recent Paris attacks and I hope that the conversation around this film will not fuel the surge in Islamaphobia and anti-Muslim rhetoric that states that men from the region are backwards and women, powerless. That same rhetoric that has been and is still being used to justify various U.S.-led wars. It would be easy to see this film through the dominant Orientalist lens that frames Middle Eastern and Muslim women as oppressed, helpless victims. There’s no arguing that the women in this film face terrible oppression. But women all over the globe do since patriarchy has poisoned nearly every inch of this planet. To pretend that women in “developed” countries have escaped it is a disservice and a lie.

A more interesting challenge is to view this film a mirror, reflecting back to us our own experience, for in the story’s specificity it becomes universal. In contemplating the women’s lives on screen, we might examine our own. How have people felt threatened by our independence and sexuality and attempted (whether successful or not) to build barriers around us? How do our own societies stymie our sense-of-self and make our lives narrower? How have we embraced, acquiesced to, and rejected those barriers? It’d definitely be worth asking ourselves when we or those we love are being targeted, with whom will we conspire to break free – and what shoes we will wear while doing so.