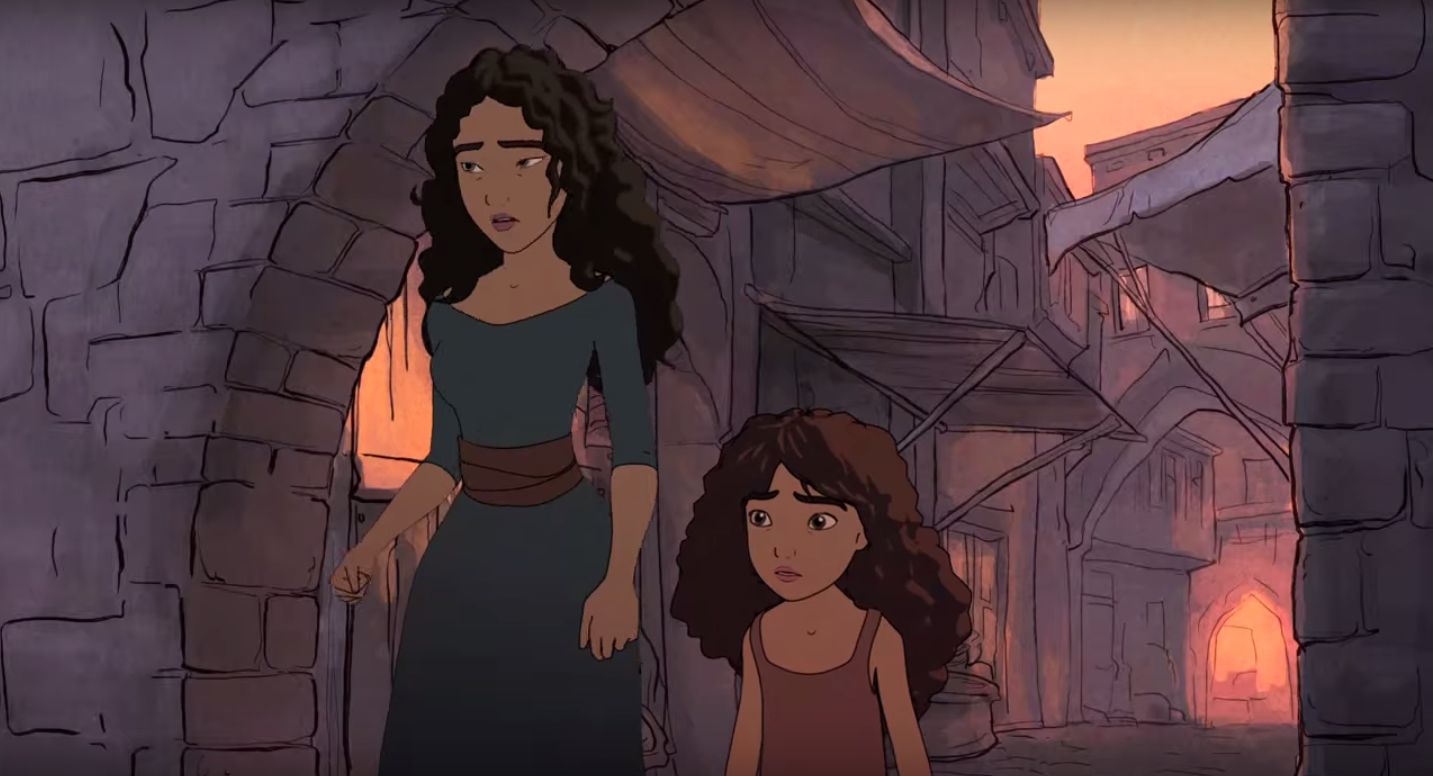 Arabs usually get short shrift in Hollywood films. If an Arab character shows up in a film, they’re all-too-often going to be one of three things: a terrorist, a shady billionaire, or a belly dancer. Arab American media analysts like Jack G. Shaheen and Dean Obeidallah have challenged people of West Asian and North African descent to become media makers so they can make films and TV shows that are more realistic in their representation. New animated film The Prophet rises to the occasion.

The Prophet, which is now playing in New York and Los Angeles and is opening soon across the country, is produced by Salma Hayek, whose grandfather emigrated from Lebanon to Mexico. Hayek has been up front about the challenges of marketing an animated film that is accessible to adults and children. In her words, there’s not really a system to market “uplifting spiritual films.” Some critics have described TheProphet as flat, pedestrian, and ambiguous. While Hayek has taken the PC route of promoting the film as universal, I think the film pushes the boundaries of cinema and takes viewers into the ripe history of the Middle East inviting them to imagine new possibilities.

The film is based on a collection of 26 poems that Kahlil Gibran—the first Arab American poet—published in 1923. The book has a loose narrative about a poet trying to make it back to his homeland after being detained for years in the make-believe country Orphalese. A villager named Almitra asks him to speak to the community before departing. His 26 monologues in response are the simple, yet profound poems that make up the book, each one addressing a different topic such as love, work, and religion. When the book was originally released, critics dismissed it for being overly sentimental. This criticism was by and large due to a lack of understanding about Arabic aesthetics since the poems line up with Eastern classics and works of the twelfth- and thirteenth-century Persian poets, such as Rumi, rather than with the modern canon of the U.S. Still, more than 100 million copies have been sold since The Prophet was first published. Last month, Vintage Books released the work for the first time in paperback.

In the 1960s, The Prophet underwent a resurgence, which is how a copy found its way to my parents’ bookshelf. When I was a teenager, I found refuge in its pages when my heart ached from troubles in love and friendship. Later I learned that Gibran was born in Bcharre, a small Maronite village in the mountains of Lebanon located just miles from my great-grandmother’s birth place, and I felt even more connected to the work and its author. Many people who have familial ties to the Middle East carry a similar affinity for the work, Hayek included.

The film’s $12 million-budget has several big names attached to it, including director Roger Allens (best known for The Lion King), Academy-award winning animation director Joan Gratz, as well as musicians Yo-Yo Ma and Damien Rice. The movie mimics the book closely, with a loose narrative arc that functions as an excuse for the poet and political prisoner Mustafa (Liam Neeson) to recite eight of the 26 original poems to villagers.

At first, it is a bit disconcerting to watch a Disney-ish film bust into beautifully illustrated stories. Each poem is illustrated by a different artist and has a distinct aesthetic and musical score.  Suffice to say, if you need a film that has a strong narrative plot, this one is not for you. If, however, you’re open to experiencing cinepoetry, an emerging genre that blends poetry with cinematic expression, then check it out. Be prepared to not only hear but to watch poetry, allowing you to experience it on new levels.

In the beginning of the film, a ship has arrived to take Mustafa back to his homeland. Two guards escort him from the isolated mountain abode where he has been on house arrest to the sea. “My crime?” he asks in an opening scene, “Poetry.” When Mustafa is asked to renounce his words and convictions, he refuses. This is a strong acknowledgement of the powerful role of the poet in Middle Eastern societies both historically andtoday.

The first poem, On Freedom, was one of my favorite stories. In the film, birds attempt to fly but they become tethered to a tree. Mustafa recites, “In truth that which you call freedom is the strongest of these chains, though its links glitter in the sun and dazzle your eyes.” This is a poignant beginning for U.S. audiences, since we are trained to think of ourselves as superior to those in the Arab world because of our “freedom” and “democracy,” an ideology that has justified multiple U.S.-led military operations in the region in the recent past. 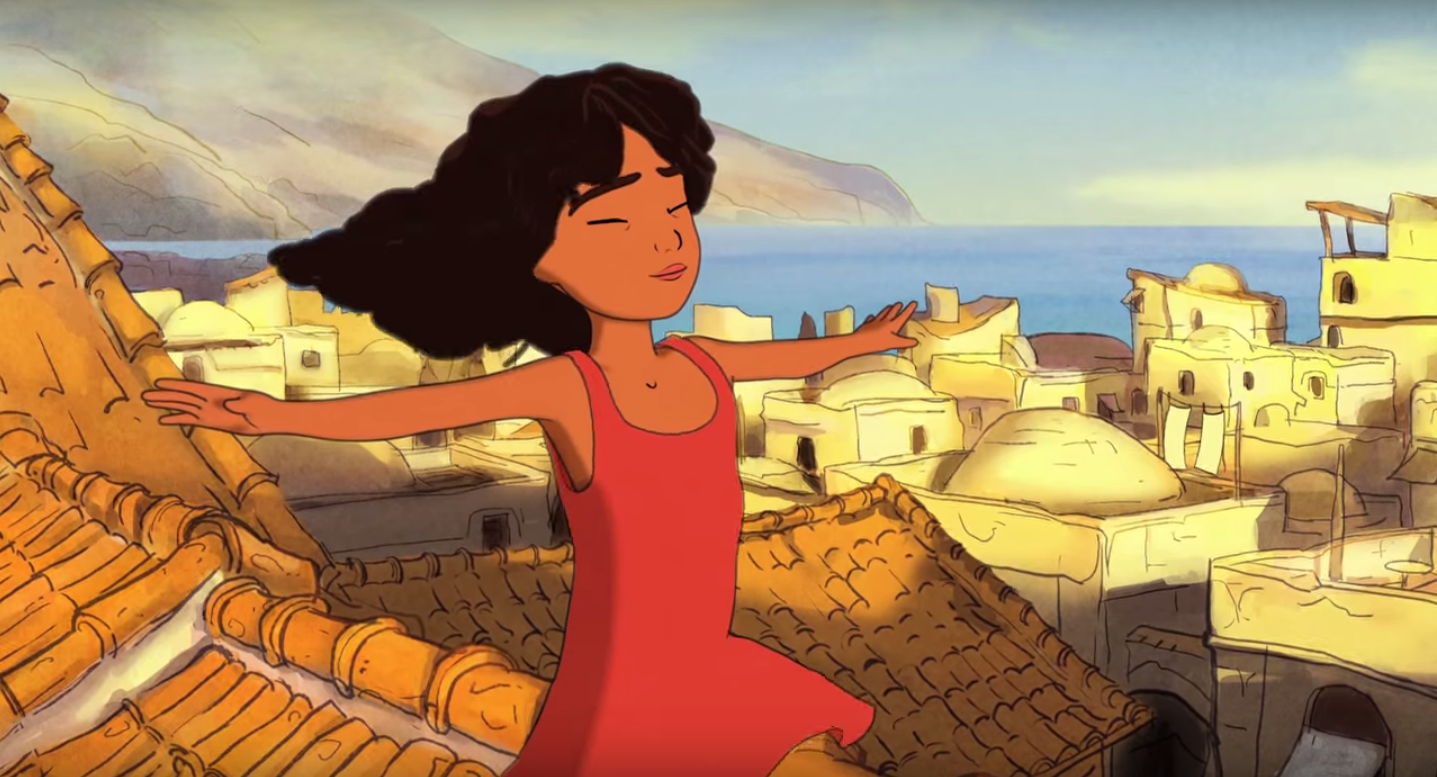 Kamila (Salma Hayek) is Mustafa’s housekeeper. It seems unlikely that a police state would pay a sexy widow to clean up after a political prisoner but it serves as an essential plot point so that her daughter Almitra (Quvenzhané Wallis) can follow her to work and encounter the poet.

When a guard won’t let the child into the house due to security concerns, her mother says with a laugh, “She’s the leader of the resistance.” The statement foreshadows Almira’s role in preserving Mustafa’s work. Also, I like to take it as a nod to the women have played leading roles in the recent movements throughout the Arab world. Having a courageous, female protagonist is something we need more of: A recent study found that out of the 700 top‐grossing films from 2007 to 2014, only 11 percent of had gender‐balanced casts or featured girls or women in roughly half of the speaking roles.

That said, the film isn’t always spot on in its treatment of women. Almitra’s decision not to speak for two years after her father’s death feels eerily similar to Ariel losing her voice to nab her man in The Little Mermaid.Eventually Almitra talks in an attempt to inspire Mustafa. Her voice comes and goes in relation to the male figures in her life, which is problematic. Meanwhile, Kamila’s hips moved side-to-side with swag and she dripped with sexuality—which was unnecessary.  Some women in the market place wore hijab, though most women were thin with robust breasts, an unfortunate choice.

The movie does a lot well. The backdrop is Ottoman Syria of the early 1900s in the part that is now Lebanon; the police state was ruled by Muslim Turkish officers and Christians were an oppressed group. An acknowledgement of the diversity of the region’s religions is rarely seen on the big screen but in The Prophet, it was nice to see that when Almitra visits her father’s grave, there are crosses on the tombstones. Later a guard-turned-ally distracts his colleagues by pulling out French postcards. Recognizing the remnants of colonialism is another rarity. And then there’s the food. The film is full of people selling, eating, and sharing dates, pistachios, oranges and olives. At a wedding, the villagers use a cooked lamb shank and helwa, a sweet delicacy, to distract the head guard—how’s that for peaceful resistance? Seeing the humanness and multiplicity of Arabic people and culture on the big screen is a refreshing anomaly. I look forward to the day that it’s so common we can take it for granted.

This lil’ guy says, “Ho Ho Ho” every time he see a Santa. #blessed
So thankful to have had Ferni as my Spanish brother since he lived with my family in 1986, and Edith as my sister-in-law since I landed in Spain in ‘93. #blessed
So happy to celebrate my honey’s 50th with good friends and Elton! #eltonjohnfarewelltour #ilovela #happybirthday
%d bloggers like this: